The village of Poyntzpass dates only from the end of the eighteenth century but, because of its location, the area had long enjoyed some strategic importance and was protected by a garrison in times of unrest or war. The long, low-lying valley, which runs from the Bann to Carlingford Lough, was -and still is – very liable to flooding. Two or three centuries ago it would have been densely wooded and virtually impassable except at two or three places or ‘passes’, where the swamp was narrow enough for a ‘causeway’ to be constructed. In this area these ‘passes’ were Scarvagh ‘Pass’ Poyntzpass and Jerrettspass.

At Poyntzpass a castle, the remnants of which were visible up till the middle of the nineteenth century, guarded the ‘pass’ in earlier times. Today there is no trace of it other than in ‘Castle Corner’ the name by which a corner of William Street is sometimes known. However, as recently as world War Two, the authorities thought the ‘pass’ still retained some strategic importance, for a concrete ‘pill-box’ or machine-gun post was constructed overlooking the bridge as a potentially important crossing place in the event of invasion. 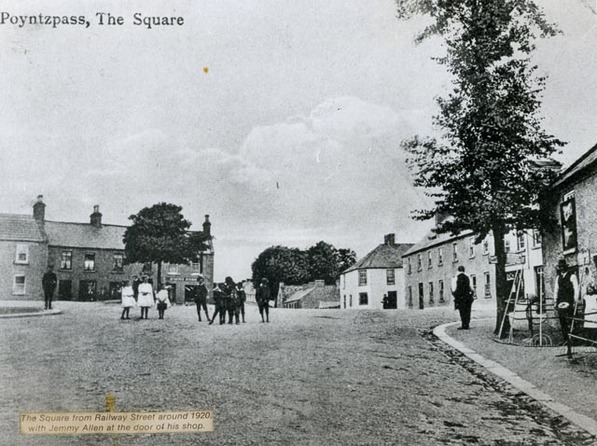 In times of war armies used this pass to move from Armagh to Down or in the opposite direction. (In 1646 General Monro’s army marched through here en-route to defeat at Benburb, while William of Orange’s army secured the pass and encamped to the East of Poyntzpass on his way to victory at the Boyne in 1690.)

In the late sixteenth and early seventeenth centuries, during the O’Neill wars, which culminated in the Battle of Kinsale in 1603, the garrison here was commanded by a series of officers. One of these officers was named ‘Fenwick’ and so the ‘pass’ was for a time called ‘Fenwick’s pass’. When he was replaced as commander by Charles Poyntz, the ‘pass’ then became known as ‘Poyntz’s Pass’ from which the village’s name was later derived. The local tradition has it that it was during the period of watching and guarding the pass that the soldiers whiled away their free time by constructing a ball-alley and playing handball. Apart from filling up their idle hours, playing the game would have helped morale and helped to keep them fit.

Charles Poyntz earned great praise for his bravery when he and his men fought off an attack by greatly superior numbers of O’Neill’s troops, who were at that time encamped nearby at ‘Tyrone’s Ditches’. As a reward, he was granted 500 acres of land in the nearby townland of Brannock in 1609 as part of the Plantation of Ulster. A native of Acton in Gloucestershire, he brought a dozen families from Gloucestershire to support him and built a village for them to live in. He called the village ‘Acton’ after his Gloucestershire home.

Nearly two hundred years later when a direct descendant of Charles Poyntz, Thomas Alexander Stewart, established a village here he called it ‘Poyntzpass’ the name by which the area had long been known. Stewart gave land for the building of churches and schools and obtained for the village the right to hold fairs and markets. 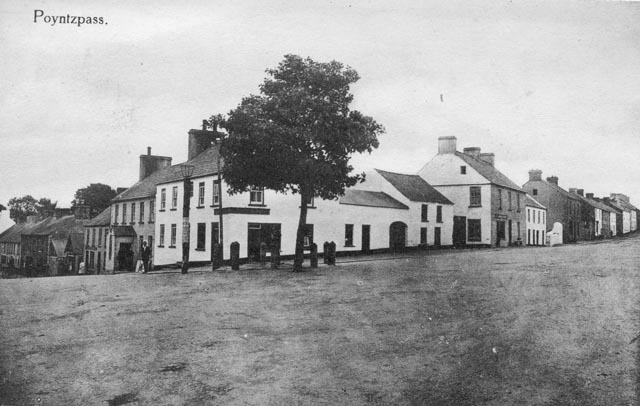